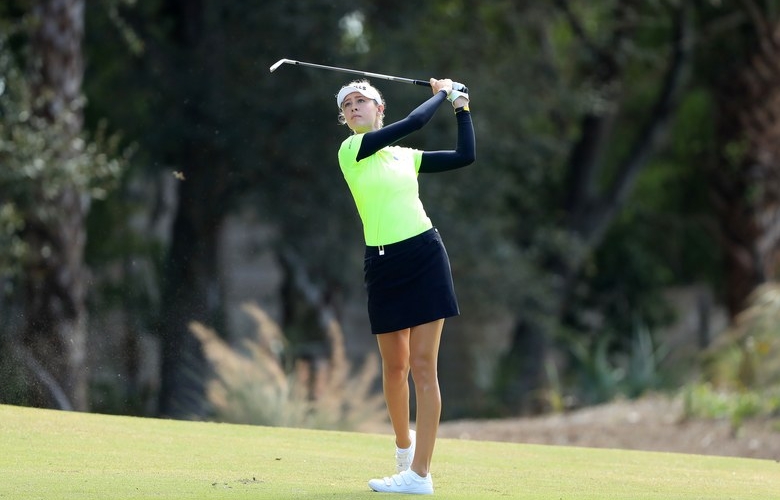 Sam Greenwood/Getty Images
Nelly Korda plays a shot on the second hole during the third round of the 2019 CME Group Tour Championship.

By Keely Levins
NAPLES, Fla. — After making double bogey on the third hole of the third round of the CME Group Tour Championship, Nelly Korda was in a bad place on the leaderboard. The 21-year-old American started the day at nine-under at Tiburon Golf Club, tied for third, three shots behind leader Sei Young Kim. But the double put her at seven-under, and while Korda struggled at No. 3, Kim had birdied the second hole. Quickly, Korda found herself six back.

But it didn’t stay that way for long. Korda made birdie at the fourth, a moment that if she winds up winning the LPGA season finale on Sunday will be seen as an obvious turning point.

“All I was thinking was there is this line in a rap song, Last night I took an L but tonight I bounced back,” Korda said, laughing. (Taking an L meaning taking a loss.) “That was what I was thinking on the next hole.”

For those of you not well versed in the beats of Big Sean, the lyric is from his song “Bounce Back.” Korda says she always has songs playing in her head while she’s on-course. Her warm-up playlist covers everything from country to rap.

“I have so many songs stuck in my head,” Korda said. “Someone could say something in the crowd, and I’ll pick up a song from that and it’s in my head all day.”

Bounce Back turned out to be the right song to latch onto. Korda made two more birdies on the front to turn in 35. The back nine started with three straight birdies and included two more for a bogey-free 31—six shots better than the 37 she shot on her second-round back nine.

As Korda signed for a 66, Kim came in with a 68. That six-shot gap between the two was now down to one as they head into Sunday’s final round. With a Saturday 70, Caroline Masson is four shots back of Kim at 12 under. Charley Hull is a shot behind her, and a cluster of four players, including Nelly’s older sister, Jessica, are at 10 under.

Nelly and Kim are paired in the final twosome. Both have won twice on the LPGA Tour in 2019. For her part, Kim is excited for the pairing; she calls Korda her favourite player. Kim likes playing with Korda because she plays fast.

The pace of the final group might slow down as the reality of what’s at stake comes into clearer view—specifically a $1.5 million first prize. It’s the biggest winner’s payout in the history of women’s golf. But both players are trying to forget about the money.

Kim says that the key to maintaining her lead through Sunday afternoon is to “just relax and enjoying for tomorrow.”

“I’m not going to think about it too much,” Korda said of the money. “Just going to go out, have fun, play golf, and see where it goes.”

With the right song in her head, she could find herself going straight to the bank.