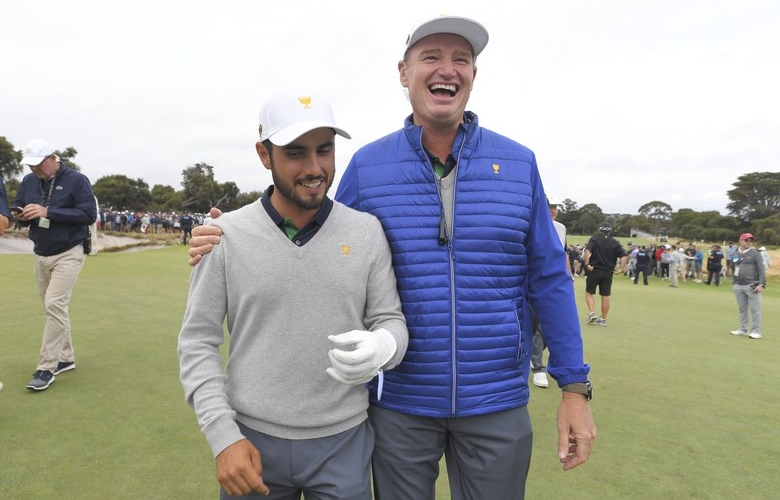 By John Huggan
MELBOURNE—For the first time in three days, things looked like they might not be adding up for International team captain Ernie Els at the 13th Presidents Cup. Addicted/devoted/faithful/dependent—you choose the description—on his analytic, statistics-based strategy, the South African’s previously dominant algorithm seemed to be miscalculating during the second series of foursomes against the United States side. Suddenly, the prospect of a balanced equation was in play. Where for long enough 12I > 12US the prospect of parity, 9x = 9y, loomed.

In the end, that wasn’t to be. Courtesy of some remarkable play by Marc Leishman and Abraham Ancer, who came from 5 down with eight to play to finish all square with Justin Thomas and Rickie Fowler, and another gutsy half from Byeong Hun An and Joaquin Niemann against Matt Kuchar and Tony Finau, the pre-singles calculation has the Internationals still ahead by two points, 10-8.

From what must have been the depths of depression, Els’ day turned into one of redemption, silencing those wondering why the likes of Hideki Matsuyama and C.T. Pan—convincing winners in the morning four-balls—were benched after lunch. For the South African, the numbers are still adding up. Even losing the fourth session, 3-1, had him oozing positivity.

“What a four sessions it’s been,” he said. “It’s been really exciting and a lot of work. I normally sleep quite a few hours a night, but I haven’t slept too many hours this week. Our guys have done very well against this exceptional team, to be in the lead. And today was some of the most exciting golf I’ve seen for a long time. For us to scratch and scramble for one point this afternoon, the guys were very excited about that.”

Els, never one to back off from a fight, was also moved to comment on crowd behaviour at Royal Melbourne in the wake of complaints from his opposite number on the American team, Tiger Woods. Given the abusive treatment almost routinely dished out to visiting players in the U.S. at both the Ryder and Presidents Cups, Woods’ remarks must have seemed a bit rich.

“I’ve played in many Presidents Cups,” Els said. “I’ve played in the U.S. many times. If you look back at New York and how these players were treated there, this crowd is pretty quiet. We shut up and we get on with things. That’s what we did in New York. It’s part of the game. And I’m with Tiger. I’m against heckling. I’m against crowds being disrespectful to the players. But it happens. And we, as professionals, move on.”

What that means strategically can be summed up in one word: nothing. Both captains pleaded ignorance.

“It was just the way that pairings panned out and how the guys played together in practice, and the formula we’ve been using for quite some time,” Els said. “We just went with that.”

Indeed, and a prescription he hopes will lead to ultimate success.