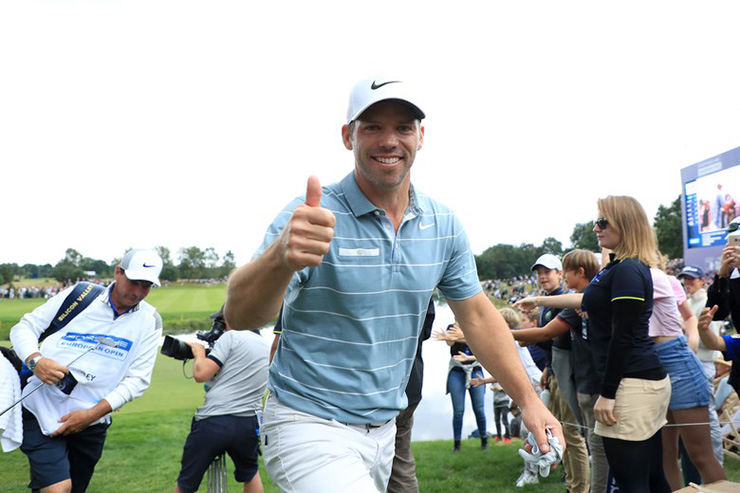 By Ryan Herrington
Experience doesn’t win golf tournaments all by its lonesome, but it can make winning golf tournaments more manageable. Although his last came in 2014, Paul Casey had 13 victories on the European Tour to lean on Sunday at the Porsche European Open while the other three golfers whom he shared the lead with three holes to play—Bernd Wiesberger, Bernd Ritthammer and Robert MacIntyre—combined for just six (and all them were thanks to Wiesberger).

Casey’s past success wasn’t the reason he rolled in birdie tries of nearly 30 and 15 feet on the 16th and 17th holes, but it made the putts less daunting. And by holing them, Casey was able to calmly make a par on the closing hole at Green Eagle Golf Course and win for the 14th time.

Here’s the impressive putt on the 16th hole that gave him the outright lead:

Casey’s last European Tour win came almost five years ago at the KLM Open. In the meantime, he won twice on the PGA Tour, taking the Valspar Championship in 2018 and 2019. While turning 40 is a milestone some associate with your game slowing down, Casey can rightly say he’s playing some of the best golf of his career.

“I’m not sure I can put my finger on it,” said Casey, who sentimentally worked at the European Open as a volunteer when he was 14 in 1991. “I’m enjoying my golf. I feel a good understanding of my golf game.”

Casey did have to sweat things out somewhat after he finished his round playing in the penultimate group. Both MacIntyre, a Scottish rookie on the European Tour with two runner-ups this season, and Ritthammer had putts on the par-5 18th to force a playoff, MacIntyre from 30 feet for eagle and Ritthammer from 20 feet for birdie. Both, however, left them short, settling instead for birdies to join Matthias Schwab in a share of second place.