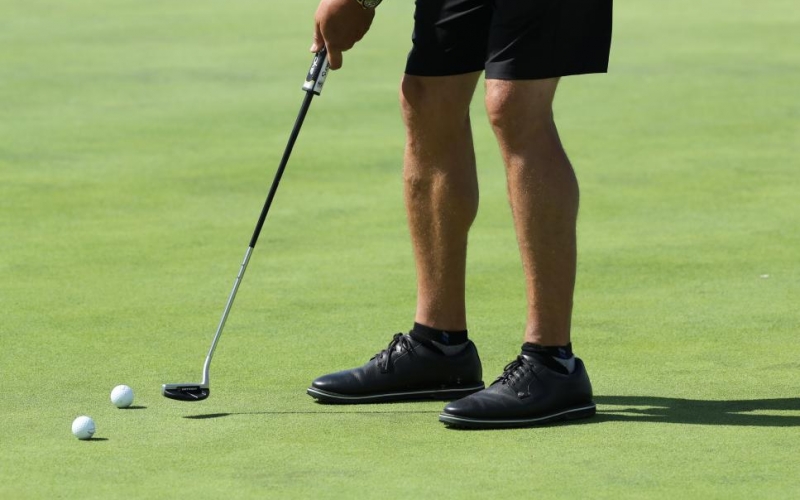 By GolfDigest.com Editors
Former player and current Australian broadcaster Ewan Porter spurred a fiery social-media debate (is there any other kind on Twitter?) with his experience at a golf club this week. Specifically, that Porter was shunned from the property due to a fashion faux pas.

“Visited a premier Sydney golf club today,” Porter wrote. “Was told I wouldn’t be able to play wearing black socks with black shoes and I needed to buy white club socks. Leaving this open for discussion, but I said out of principle, I’d prefer not to play than bow to archaic rules.” Porter later said he has been banned by the club for taking his tale public.

There’s no doubt the sport is trending to more relaxed standards when it comes to dress code. Mock collars, joggers, sweatshirts, whatever Rickie Fowler decides to rock in Hawaii. Not exactly pieces from Walter Hagen’s closet. However, the game remains rooted in a conservative mindset, one that often clashes with the new attitude towards attire, a clash evidenced by the backlash from Tyrrell Hatton’s hooded sweatshirt on the European Tour.

So, Porter getting the boot for wearing black socks … reasonable or ridiculous? Four Golf Digest editors weigh in:

Club is wrong
REEEEEE-DICK-YOU-LUSS. It’s egregious on a few levels. The first, of course, is the macro level. For so long, golf has been in the business of telling people what they can’t do—who can’t play, what can’t be said, what can’t be worn. If we want to, all together now, grow the game, golf has to go out of its way to foster an inclusive environment. Clinging to archaic and trivial rules like no black socks only furthers the stereotype of golf as the old, stuffy, out-of-touch domain of rich old men.

With that said, I am not against the institution of private clubs, nor private clubs being able to enact and enforce their own set of rules. But we have to take a step back here and examine the specific rule in question. It’s one thing to ban music or cell phones on the course, because that stuff actually impacts other golfers’ ability to enjoy their time; it’s another to tell someone they can’t play the golf course because their socks—which, in theory, aren’t really visible during the round!—aren’t the right color. If someone’s decision to wear black socks truly upsets you, that sounds like a you problem. In summation: If a law is unjust, it is no law at all. —Daniel Rapaport.

Club is right
Let’s be very clear about something: This sock rule is one of the more absurd and bananaland things I’ve ever heard. I couldn’t agree more that it shouldn’t exist, and that golf should do away with many of these archaic guidelines that only push people, young people in particular, away from taking up the game. Wear a hoodie, turn your hat backwards, blast music, break out the cargo shorts, whatever. I’m all for it. (Just kidding. I draw the line at cargo shorts).

All of that said, when I’m going to a place where I know there are rules, I make sure to follow them. Do I like them? No, but I follow them, because it’s usually pretty simple stuff to follow. Don’t change your shoes in the parking lot. Take your hat off inside. Tuck your shirt in. Oh, the horror! My generation acts like they are being asked to donate a kidney with this stuff. If you know the rules going in, you can’t be shocked when they are enforced. If you don’t like them, you don’t have to play at that club. It’s as simple as that. —Chris Powers.

Antiquated, archaic, whatever fancy synonym you want to put for behind the times on this socks policy—or any negative responses to hoodies, for that matter—I won’t fight you. Agree with the spirit; golf already has enough barriers to entry, dress code shouldn’t be one of them. Also, white socks and black shoes … what’s the model for this ensemble, postal workers? Plus, imagine getting riled up over, uh, socks. In case you haven’t been paying attention, it’s been a busy year.

And yet I agree with the club. Because, well, it’s their club.

Everyone has to wear white socks? Make the dress code Tommy Bahama shirts and MC Hammer pants for all I care. Your club, your rules. And if you’re a guest, you abide by those rules. I have neighbours who have a no-shoes policy in their house. I hate it, but if they invite me over for a beer, I’m not going to stomp around in my Nikes. Same with Wimbledon. If you want to play at the All England Club, you have to wear white. If you don’t like it, well, there’s always Roland Garros. To get invited somewhere, not follow by those guidelines—especially on something innocuous as what you’re supposed to wear—and then make a stink of it … save the outrage for something that actually matters. —Joel Beall.

Do your homework
In general, I tend to be a rule-follower by nature and always check the dress code before going to a new golf course. That’s not to say that I support dress codes in golf at all—I think it is an elitist concept that makes golf less welcoming and a huge barrier to entry for new golfers—but doing some research can help avoid awkward encounters like this. Formal rules aside, every golfer should be wearing no-show socks and there shouldn’t be any ifs, ands or buts about it. If your golf shoes hurt when you wear no-show socks, you should reconsider your footwear choice to something more comfortable around the ankle as that discomfort means your shoes are either too tight, not forgiving enough or lacking support.

If you choose to use sock choice as an expression of your personality or to enhance an outfit, make it a clear and deliberate statement. Typically you’ll want to match your socks to your shoe color or at least wear darker socks with darker shoes. Then, coordinate your look to support the color theme you’ve chosen. If your socks are purple, maybe select a hat that has the same shade of purple in the logo or weave in some laces within the same color family of the socks. And if you’re confused, Google “Color Wheel Matching Guide” for starters. —Brittany Romano.

There were three major champions who started their senior tour careers in this calendar year. No doubt most golf fans can name two of them off the top of their head.