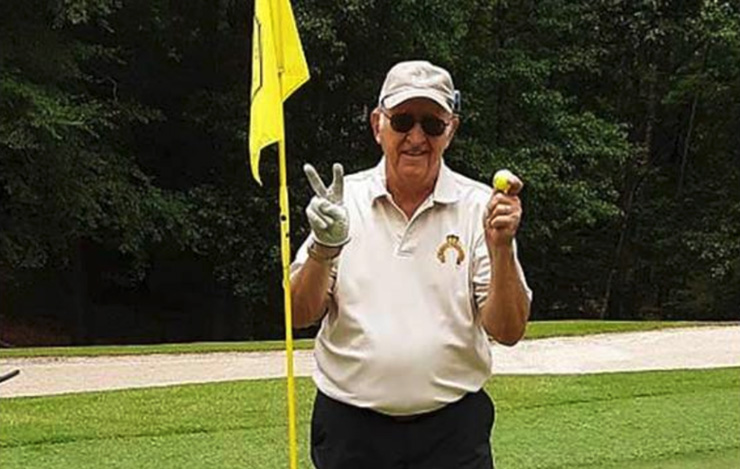 By Joel Beall
To all cursed hackers who have never made a hole-in-one, let this be your sign of hope.

On second thought, hide your eyes.

“When the first one went in on the 12th hole, I was really excited,” Miller told KARK.com. “It was a great shot over the front bunker onto the green; it bounced once or twice and went into the cup. We all jumped and shouted.”

But—and here’s where we’d advise all “1”-less golfers to avoid sharp objects—Miller conceded the second was “a total fluke.”

“I sculled my tee shot on 17. It never got much off the ground and hit the ground only about 70 or 80 yards from the tee,” Miller said. “Since the ground was dry and the hill sloped downwards, the ball continued to roll. It rolled past the front left bunker guarding the green and rolled onto the green. Once the ball got onto the green, one of my playing partners yelled it’s going to go into the hole – and damned if it didn’t. I was thrilled but couldn’t believe such a lousy shot ended up in the hole. I guess it proved what my dad said to me when I first began playing, ‘it’s not how but how many.’”

Miller is known as the “Traveling Guy.” He once visited and played golf in, every state during a calendar year, writing a book on his journey. According to Miller, he’s had one other hole-in-one in his career, which happened 45 years ago.

If this wasn’t enough, Miller claims to have shot his age two days before his holes-in-one feat. The man is clearly a legend. Or, to some jealous golfers, the bane of their existence.