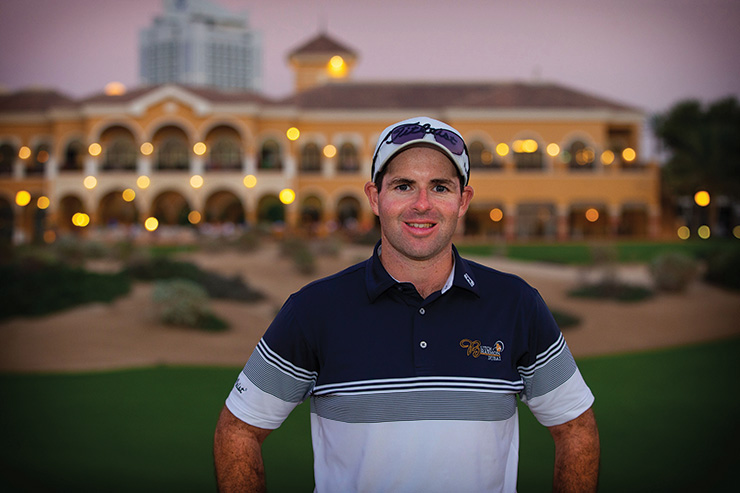 We meet the new Director of Instruction at the recently rebranded Claude Harmon 3 Performance Golf Academy at The Els Club, Dubai

Nobody in my entire family played or even plays now. Friends of mine were going to play at a local pitch and putt club when I was about nine and I tagged along. Fell in love with it straight away and when a driving range opened up beside my grandmother she encouraged me to go down. From then she gave me just about every opportunity to play from giving me lifts here there and everywhere to helping me enter tournaments.

I spent most of my time at Navan Golf Club and joined Royal Tara later in my junior years. Navan was always my home though as it was right next to my grandmothers, I practically lived there for 10 years!

I got to scratch handicap and hovered around that for a year or two, never broke far into the + figures though.

I turned pro when I was 18 and went to Euro pro qualifying with a good friend of mine, Emmet Staunton. It was a shock to the system, to say the least but I played on mini-tours, EuroPro and Jamega, for about two years before I realised there were just too many guys out there that were playing to a much higher standard than me.

After that, I went through the PGA system back home, began running pro shops and golf clubs at a very young age. I quickly realised that If I couldn’t play for a living myself the next best thing was to help someone else get better and even play for a living, that’s where the infatuation with coaching began.

I love Dubai. I moved out five years ago and the attraction was simply to work at one of the best golf schools in the world. Having received coaching from Butch when I was about 15, his three schools were always the ones that I wanted to work in and figure out why the Harmon family were so good at what they do. Luckily I had a few things fall into place and when JP [former Butch Harmon School of Golf DOI Justin Parsons] asked me if I would like to come over there was no hesitation, it was an immediate yes.

Becoming Director of Instruction is a real honour. Taking over from Justin first of all, he has been such a mentor to me since I arrived and to be the one that tries to fill his very large shoes is a huge task, but one I am extremely humbled to accept. Secondly being the first DOI at the new Claude Harmon 3 Performance Golf Acadamy is extremely exciting. Claude has been another huge influence on my coaching career and someone I am lucky enough to also call a great friend. We have some big plans for the school going forward so there should be some exciting times ahead.

Justin Parson’s passion and drive was infectious from the word go. He was determined to be the best coach he possibly could and it was hard not to have that rub off on you. That is exactly why he is now, in my mind, one of the best coaches in the world. His players are also backing that up with some big results and it wouldn’t surprise me if later on this year at some point you will see JP and one of his guys with a major trophy in hand.

Toby Bishop was my very first lesson when I arrived in Dubai and even from a young age, he showed promise. Since then both he and his parents committed to a plan and have stuck to it for five years. As with all golfers we have had highs and lows but he is probably one of the most consistent improvers I have seen and he always surprises me with what he is capable of. He has always been a pleasure to teach and is a credit to his parents Mark and Kristen. Having their full support is always a big help and when you see the great bunch of talented guys that he is constantly around, it’s a big help for his development.

I think you could sum up my coaching philosophy with “do whatever is necessary to make them better”. As coaches, we often jump to a technical change which at times can be extremely important. However, I think what the Harmons, JP included, have mastered over the years is being able to quickly identify what each player needs and when. That could be anything from a technical change to an improvement in their movement or sometimes even something as simple as lending an ear and letting them vent to you about things away from the course. I feel that’s what truly makes a great coach over a teacher, anyone can learn the positions but knowing how and when to apply it is far more important.

I think if I could tell amateurs one thing it would be stick to the plan. I think most people expect each lesson to be a new theme, whereas more often than not, themes on swing changes could last months. If they want consistency they need to be consistent about what they work on rather than taking a number of tips from various different sources.

Claude has been fantastic to me over the years and has given me some great opportunities to watch and help him with some of his players. Every year since I have been here he has spent time with the instructors. He had originally set up the school 10 years ago with Justin so it’s a very natural progression for him to take it on and make it his own. It’s been particularly exciting over the last few weeks seeing the place get a spruce up, some new images and new equipment as he comes in to take over.

Jordan Spieth always comes to mind as a star we could all learn from simply because of how smart he is when playing the game. I think if most golfers played as smart as Jordan does they would instantly save shots on the golf course. His course management tends to be great and he really gets the most out if his game rather than trying to be someone else.

Tiger will always be a favourite deep down. Even at the Ryder cup despite him struggling it was his group that always seemed to have a buzz around it. Of the more recent players, I would say Brooks and DJ with their “all in, go for broke” attitude. I think it brings a huge amount of excitement to the sport and can only be good for the game.

I think had you asked me two years ago when he could only complete the first round of the Desert Classic, I would have said no, Tiger won’t win another major. But after seeing him get back into the top 20 in the world this year and then winning the Tour Championships, I think I would be a silly man to bet against him.