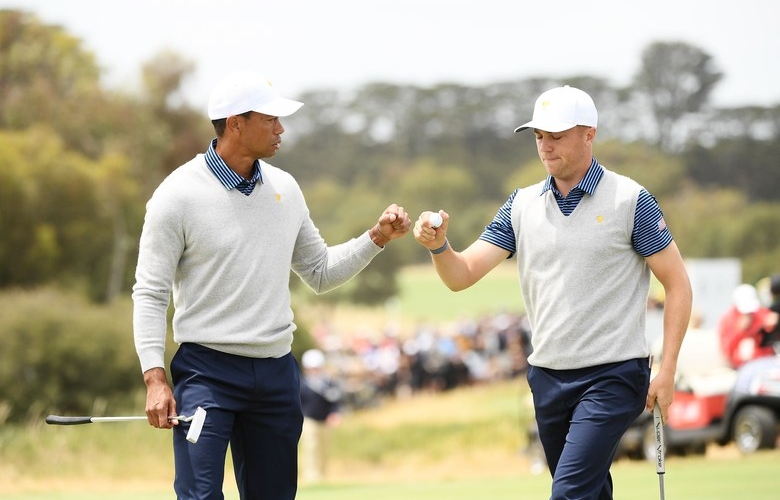 By Dave Shedloski
MELBOURNE — Tiger Woods finally decided it was time he benched his best player.

That would be himself.

After winning twice with Justin Thomas, Woods will be a spectator for today’s morning four-ball matches, sticking with a script predetermined from the start of this Presidents Cup. Though his team trails, 6½-3½, Woods is eschewing the playing portion of his dual role as playing captain, content to let his U.S. team score some points without him.

He’ll send Thomas out today with fellow Jupiter, Fla., resident Rickie Fowler in the first match, against Australia’s Marc Leishman and rookie Haotong Li of China, who will be making his first start of the week.

“Yeah, that was kind of the game plan. It would be hard for me to go all the sessions,” Woods, 43, said after making his four selections for the third session, which begins at 7:02 a.m. local time, 4:02 p.m. EST Friday in the States. “I’ve been fortunate enough to go out there with JT, and we’ve gotten two points. JT played great, and Rickie played awesome this afternoon. They have had success before, and send them back out.”

RELATED: Americans still trail by three, but avert disaster with a late rally

Thomas and Fowler won 2½ points together two years ago at Liberty National, so Woods has to feel comfortable with that combo.

As for his comfort level with himself wearing the captain’s cap solely for the first time during competition, that was another story. “I know I’ll be stressed out watching these guys play,” he said.

One of two pairings he wasn’t willing to break up is that of rookies Xander Schauffele and Patrick Cantlay, who evened their record to 1-1 with their 1-up foursomes victory on Friday. They’ll go out again at 7:16 a.m. against fellow newcomers from the International side Sungjae Im of Korea and Abraham Ancer of Mexico. Ancer already is 2-0 this week, and Im won a four-ball point with Adam Hadwin on Thursday.

Whatever Woods sees in Webb Simpson and Patrick Reed, who are 0-2, only he knows because in their 34 holes together they have trailed for 28 of them and led for one. Reed, who seems to have dug himself a deeper hole with his “shovelling” antics on the 11th hole on Friday, now has lost five of his last six matches in the Presidents Cup and Ryder Cup, including 0-4 in team play. They’ll take on Japan’s Hideki Matsuyama and C.T. Pan of Chinese Taipei in the third match. It’s the first pairing International captain Ernie Els has used more than once.

Which kind of is, you know, the goal. But never mind.

“They have done all the little things right,” he added. “It’s just a matter of having things go your way, and that’s part of playing these team sessions. You know, a putt here, a shot here or there, or you just get outplayed, it happens. But these guys have paired up really well. They are excited about being with one another, and they have handled everything extremely well.”

Speaking of doing things extremely well, Adam Scott, the veteran Aussie playing under enormous pressure here at home, has played brilliantly thus far in winning twice. He, too, will be a part of a winning team from earlier in the week, rejoining Byeong Hun An of South Korea, with whom he triumphed in four-ball on Thursday.

Though the Americans felt like they had the momentum going into the third session after pulling out a rally for 2½ points, Els wasn’t thinking that way.

“That 4-1 lead was a little like having a six-shot lead in a tournament,” he said. “You know, you might let your guard down just a little bit. But then you reset the next day and get after it again, and that’s what we’re going to do.”