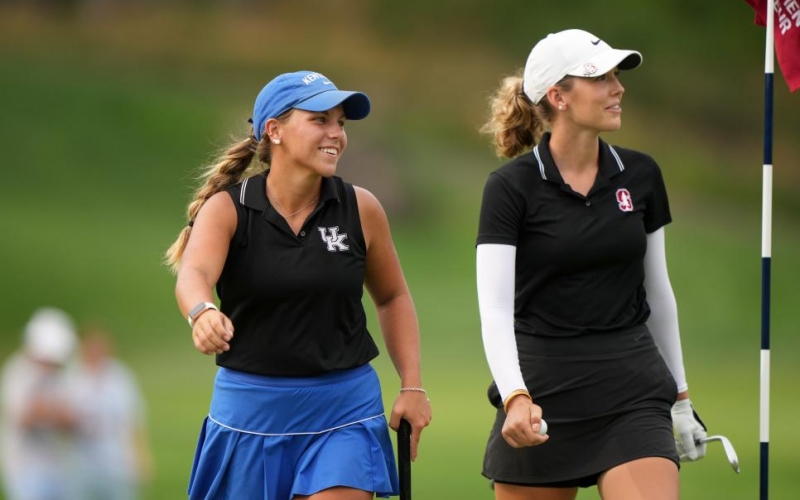 Darren Carroll
Jensen Castle and Rachel Heck, who will now both represent the U.S. at the Curtis Cup this month, played a thrilling semifinals match at the U.S. Women’s Amateur, where Castle prevailed in 19 holes and then went on to win the Amateur to earn a spot on the team. (Darren Carroll/USGA)

By Ryan Herrington
With her victory on Sunday at the U.S. Women’s Amateur, Jensen Castle knew her plans for late August had changed in an instant. Rather than spend the end of the month settling in on campus for the start of her junior season at the University of Kentucky, the 20-year-old from West Columbia, S.C., had locked up a spot on the 2021 U.S. Curtis Cup team that would be competing against Great Britain & Ireland at Conwy Golf Club in Wales, Aug. 26-28.

The fivesome join Rose Zhang (the top ranked player in the World Amateur Golf Ranking), Rachel Heck and Allisen Corpuz, who were named to the team a few weeks ago.

“I couldn’t be more excited to finally have the team in place,” said Ingram, with seven of her eight players sitting inside the World Amateur Golf Ranking top 40. “Over the last two years, I’ve gotten to know many of these young ladies, and have a tremendous amount of admiration and respect for them as golfers and people. We’re going to work hard over the next few weeks with the goal of bringing the trophy back to the United States.”

The Americans will be trying to win the Cup on foreign soil for the first time since 2008.

The USGA also named two alternates to the team: Auburn junior Megan Schofill and high school senior Megha Ganne. Both players will travel to Wales in the event they might be pressed into service due to on-going issues with COVID-19. This was the same policy that was in place at the Walker Cup in May, and which proved critical when both the U.S. and the Great Britain and Ireland teams had several players knocked out due to a stomach bug.

On Monday, the R&A announced the members of the GB&I team, captained by Elaine Ratcliffe, who will try to avenge its 17-3 loss to the Americans in 2018 at Quaker Ridge Golf Club.

“Home matches have been very successful for GB&I in recent times,” Ratcliffe said, “and this year we have selected a highly skilled and talented team, which is focused on winning back the trophy on home soil. I know that they will enjoy the opportunity to compete together and create memories and friendships that will last a lifetime.”

With the teams now set, captains, players, and reserves have a little more than two weeks to prepare for the matches in Wales at the end of the month.

No surprises as the U.S. dominates singles to beat GB&I in Curtis Cup