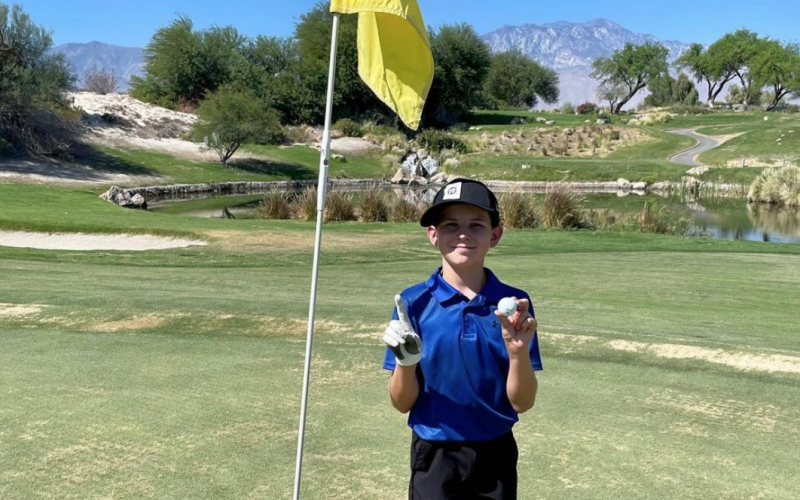 By Keely Levins
As a few of us on the Golf Digest staff know all too well, the quest for a player’s first hole-in-one can take years, decades, an entire golf lifetime. But it turns out, some players don’t have to wait very long at all for their first ace. Or their second.

Jake Martinez, an 11-year-old from Tucson, made two holes-in-one on Saturday at the Palm Springs Open, a U.S. Kids Golf tournament. According to the National Hole In One Registry, the chances of that happening are 1 in 67 million.

It was the first round of the two-round tournament at Weston Mission Hills, and Martinez hadn’t started off with his best stuff. He double-bogeyed the first and the third holes. Standing on the fifth tee, he had 95 yards to the pin. He turned to his caddie.

“My dad said, ‘Hey, let’s hit a pitching wedge,’” Martinez recounted in a post-round interview, which was eloquent enough to sound like it came out of a tour event instead of a U.S. Kids tournament.

“It takes one hop, and it went in,” the young lefty said. “We’re all shocked.”

Martinez continued on and came to the par-3 12th hole.

“It’s 100 yards, so I hit pitching wedge again,” Martinez said. “My dad says the exact same thing, aim left, try to draw it in there. It does the same exact thing as the last one, it hits and then it drops. We were all just in awe.”

“I just want to get more tomorrow,” Martinez said, laughing.

Unfortunately, there weren’t any more holes-in-one for Martinez during the second round. He finished with a 76 on Day 2, ultimately securing 14th place in the tournament.

Sure, getting the win would’ve been nice. But checking off your first—and then second—holes-in-one is a nice consolation.