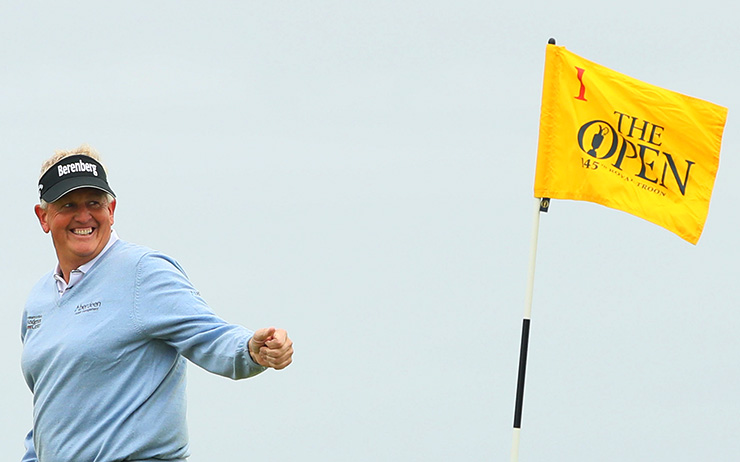 Tell us about your plans for 2017. Any European Tour/European Senior Tour events on the horizon?

My main focus is The Champions Tour [in the U.S.]. The year is shaping up very well, the tour gets stronger every year with new players joining all the time. In Europe I plan on playing the Senior Open presented by Rolex at Royal Porthcawl, and the MCB Tour Championship in Mauritius in December.

You qualified for the Open Championship last year and survived the weekend at Royal Troon after recovering from that crazy start. You said at the time that playing at your home course had inspired you to have another crack at qualifying so is Royal Birkdale on your radar this year?
Due to scheduling this year it doesn’t permit me to participate in Open qualifying this year.

Will we see a 50+ golfer win a major or do the young guns just hit to too far now?
The only major I feel a 50+ golfer can win is The Open Championship, due to the fast fairways and greens being a slower pace.

The BMW Golf World Final has been hosted here in Dubai. Tell us about your involvement and connection with BMW?
I have been an ambassador since 2010, and I am delighted to represent BMW throughout the world.

If you had to take a golf road trip, tell us what model BMW you’d chose to drive, who’d share the journey with you and where you’d go golfing?
I would love to take a 7 series along the Monterey Peninsula, ending up playing Cypress Point, Spyglass Hill and Pebble Beach. I’d take my brother and dad.

You won the European Tour OOM eight times and seven times on the trot. Do you think we’ll ever see that sort of dominance again?
I have heard it said it will never be repeated, but if it is I will be the first to shake his hand.

Have we seen the last of Tiger after his premature exit from the Desert Classic in February?
I do hope not, Tiger was, and still is, an inspiration for golfers all over the world and I hope he comes back as quick as possible.

What’s your take on the changes to the Rules of Golf proposed by the R&A and the USGA? Will it make the game more attractive and/or speed up play?
Most of the new rules that will come into effect are to do with speed of play and it’s the one thing that has been hurting the game over the last 25 years. We all must get together and banish forever the five hour round of golf.